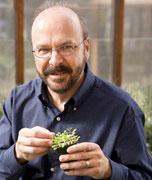 Nature vs. nurture, genes vs. environment—what is more important? My group is interested in understanding the roles of genetic and 'epigenetic' processes in cell growth and development. By understanding how the genome and epigenome talk to one another, we hope to be able to untangle the complexity of gene regulatory processes that underlie development and disease in plants and humans." Although the human genome sequence lists almost every single DNA base of the roughly 3 billion bases that make up a human genome, it doesn't tell biologists much about how its function is regulated. That job belongs to the epigenome, the layer of genetic control beyond the regulation inherent in the sequence of the genes themselves. Being able to study the epigenome in its entirety promises a better understanding of how genome function is regulated in health and disease, as well as how gene expression is influenced by diet and the environment. One of the ways epigenetic signals can tinker with genetic information is through DNA methylation, a chemical modification of one letter, C (cytosine), of the four letters (A, G, C, and T) that comprise our DNA. In the last couple of years, Ecker's laboratory started to zero in on genomic methylation patterns, which are essential for normal development and associated with a number of key cellular processes, including carcinogenesis. To ascertain how the epigenome of a differentiated cell differs from the epigenome of a pluripotent stem cell, his team used an ultra high-throughput methodology to determine precisely whether or not each C in the genome is methylated and to layer the resulting epigenomic map upon the exact genome it regulates. The study revealed a highly dynamic, yet tightly controlled, landscape of chemical signposts known as methyl groups and resulted in the first detailed map of the human epigenome, comparing the epigenomes of human embryonic stem cells and differentiated connective cells from the lung called fibroblasts. The head-to-head comparison brought to light a novel DNA methylation pattern unique to stem cells, which may explain how stem cells establish and maintain their pluripotent state. Now that they are able to create high-resolution maps of the human epigenome, Ecker's group will begin to examine how it changes during normal development as well as in a variety of disease states.